Some days, I rush around the city between appointments.

Monday was one of those days.

I realized that I don’t often value my time as much as I do of others; for example, if I have an appointment I do my best to get there early, or at least on time.  But when I’m looking forward to the gym and something comes up, well no gym time for me.  When did we stop valuing our own time?

So while I was running from appointment back to the office, I stopped.  I sat on a park bench and I ate my lunch.  I didn’t look at my phone, I didn’t read a magazine.  I just ate.  It was about 15 minutes of pure relaxation. 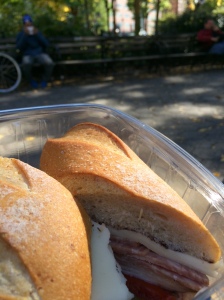 Not every day is meant to be a great one, but without the bad days, the good once wouldn’t be as memorable.

This morning I left the house at the usual 5:20 am to make it to the gym close to my office.  Upon arrival, I realized I didn’t have my phone.  Of course my brain decided to then remind me I had tossed my phone on top of a pile of recycling, which I had then dumped in the recycling bin at the curb before getting in my car this morning.

So I drove back to the house, changed into my work clothes, rescued my phone and drove back to work in time to find a decent parking spot and be sitting at my desk at 6:50 am.  Yup, only slightly frustrated before heading out on my appointments for the day. 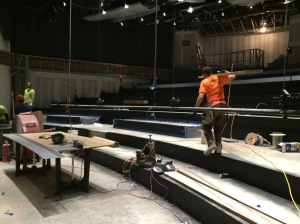 I even managed to treat myself to an everything bagel with scallion cream cheese.

Decided that I was in control of my day, I would enjoy my book and a quick lunch break.  Then the trains were delayed, a ginger kombucha spilled in my bag, and the 4 trained turned from local to express without warning.  Shit happens, and sometimes I think its just karma’s way of reminding you that you can’t control everything.  But that’s okay.

This past weekend Mister and I celebrated six months of being engaged with a party. 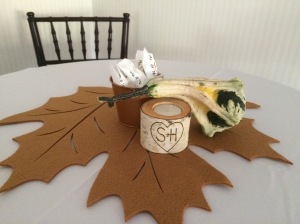 It was so amazing to be surrounded by all the people we love in one place; his family, my family, our friends and neighbors.

I did most of the decorating myself, and I was super proud of all of the personal touches I was able to include.

Above, are carved tealight candle holders from Birch House Market on Etsy.  The gourds and some heirloom pumpkins were picked out from a farm with my future sister in law.  The felt leaf is actually a decorative place-mat from the Christmas Tree Shop. 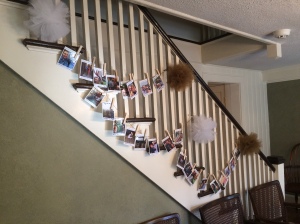 I loved having lots of pictures of us around,  but my favorite decoration was this clothesline timeline.  I used the app Printic to print some of my photos to look like Polaroids.  Then Mister and I hunkered down and wrote the dates and places where the pictures were taken; this was actually a really fun night for us.  We got to relieve some of our roadtrips, and the day we got engaged.  Then I picked up string and clothes pins from the dollar store, and voila!

The tulle pom poms are from Oriental Trading Company to hide where the string was tied to the banister.  It was an easy craft that made the decoration felt more personalized, I was really happy with how it turned out.

We had some signs, tons of photographs, flowers, and more than one fire going.  My sister brought fireworks and there was plenty of champagne.  We still have a wedding to look forward to, but for now I’m feeling pretty happy.

I’ve made two apple pies in the span of one week. 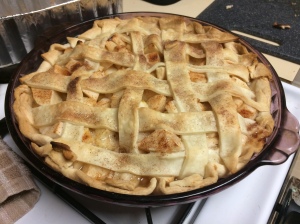 Above was made with a hannaford brand refrigerate pie crust, some old mac’s and a handful of cortlands. 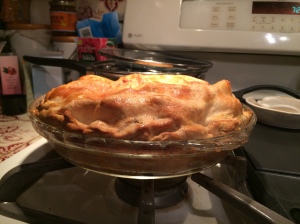 The second was made with apples my sister picked, and an Immaculate brand refrigerated pie crust.

The first pie, the apples were diced.  The second, sliced.

I think I like either a dice or a very thin slice for apple pies.  I’m not a huge fan of the still crunchy, under cooked large apple slices that get caught in the pie when the slice isn’t super thin.

But I certainly appreciate the benefit of that egg wash.  Look at the beautiful golden flaky goodness going on there.  Egg wash, cinnamon and sugar.

I love that apples are so easy and so versatile.  Chop some for oatmeal, eat one plain as a snack, cover some with flour, sugar, extra butter, and cinnamon and call it a crisp.

Does anyone have a go to pie recipe, or do you just wing it like me? I usually just cut apples, throw them in a bowl with brown sugar, lemon juice, cinnamon, nutmeg, flour and mix with my hands.  I’ve made pie crust from scratch but I’ve found its not really that worth the effort.

Tried something new, that I might have made up.  But it was pretty great if I do say so myself. 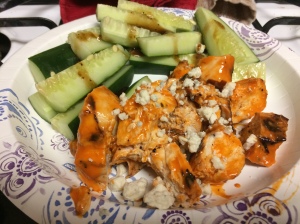 Slightly marinated chicken was grilled, cut into chunks, then tossed into some wing sauce and topped with bleu cheese crumbles.  It was like a mouthful of juicy wing goodness without saggy skin, or grease, or having to leave my kitchen.  I would totally eat this again.

This was the result of that feeling when you’ve been eating kind of gross junk food for a few days, and you can’t bear the idea of craving healthy food ever again but you also know how awful you’re staring to feel.  So its kind of healthy, tastes like junk food.  Win win.

This weekend we worked on getting some finishing touches for Mister and I’s engagement party next weekend. (cider was for immediate consumption)  I can’t wait to show off how everything comes together! I’ve probably gone way overboard, but isn’t that the fun of a party?

Nope, I have no idea if it is.  I feel like everything has a day now.  Like October 15th is International Wash Your Hands Day.

I feel like the second it starts to turn from summer to fall, everyone whips out their chili recipes.  Maybe its the cold air, maybe its the football games; but Instagram and Facebook are loaded with pictures of chili pots and saucy bowls.

Of course I made some.

I really liked the bean-less chili I made last time. Chili is great to make when you really don’t feel like doing all that much.  Brown meat, put stuff in a pot.  Leave it alone for a while.  Eat.

Reheated at work it was pretty great.  But I’m kind of thinking, does this count as chili?

I knew a family that just cooked ground beef with chili powder and tomato puree; ate it over rice and called it chili.  When I was there, this baffled me.  But now that I’ve gotten pretty hooked on this version, I’m wondering what qualifies something as chili.  Does it have to have beef? What about chicken chili, or veggie chili?  What does it have to have to be considered “chili”?

I don’t really care all that much, more a point of curiosity.  Mine was pretty good, and I’ve got about 4 quarts of it in the fridge, which was the result of about 10 minutes of work.

As I said a few times now, I’m usually in Albany on the weekends visiting Mister.  This makes every weekend a sort of mini-holiday.  For a while, this wasn’t so great for my wallet or waistline, but over time we’ve refined this vacation attitude to be a subdued indulgence.

We consistently find at least one activity or destination to get us out of the house, and give the weekend some structure.  (Mister and I aren’t great at sitting around in the house, which is part of why I’m in like with him for sure)

On Saturday, we did the Schenectady Wing Walk, which was a lot more fun than I was anticipating to be honest.  I was originally skeptical of the participating restaurants, and didn’t really think much of Schenectady as a destination beyond pastries, Proctors, and Perecca’s.

For anyone unfamiliar with the Wing Walk: for $10 you get a ballot, and one chicken wing at each of the participating restaurants.  There were 18 restaurants, and most gladly obliged in giving more than one wing if you asked politely.  When we started at 12 noon, there were no lines but by around 1:30/2pm, the lines started growing at each stop.  It had a fun, scavenger-hunt type vibe to the affair and I appreciated the opportunity to try some places that have been on my list.  Some were great (Bier Abbey, Cafe Nola, Mexican Radio, Taj Mahal Restaurant), some were really bad (Thai Thai Bistro, Aperitivo, The Grog Shoppe)  I get it, its hard to have hot, crispy, and flavorful wings for a crowd stretched over a few hours; but some were rubbery and without flavor, or in the case of Aperitivo, it was a “pork wing”, which I didn’t even realize until after I had bitten into it (don’t like surprise pork).  Total cost for the event for the two of us, $20.

We did stop at Cafe Italia for coffee and a cannoli, to break up the wing exhaustion, $6. 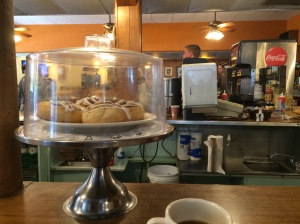 Sunday, we had recovered from too many wings and indulged in some Manory’s for brunch.  I love sitting at the counter here, but be warned that your clothes might take on an eau de fryer if you stay for more than a cup of coffee.

I got the Power House Quesadilla (or something intimidatingly named like that, can’t really remember and the menu isn’t online).  Their pancakes always look/sound so insanely good, but remember that waistline people.  I’ve got dresses to fit into.

When this showed up I almost forgot I had ordered what looked like the “sensible option.”  It was described as 3 egg whites, one yolk, ham, swiss cheese, peppers, onions, mushrooms grilled in a quesadilla.  Oh man.  This was seriously so good.  I ate half before calling it quits and taking the rest home (which I ate for dinner).  For two coffees, and two of the bigger entrees, we spent about $35 at Manorys.  You can easily get breakfast for two for $20 or under if you’re sticking to a budget.

This tasted great reheated later, which I was actually surprised by.  I put each section in a hot pan, let it crisp for a moment before putting a lid over it to let everything reheat.  Then , when the cheese looked sufficiently melty, I removed the lid and flipped it over for some further crisping.

Sunday night, I’ve made it a habit to prepare something to last both myself and Mister for the week.  For Mister I made slow cooker stroganoff, for myself I made a bean free, bison and butternut squash chili.  Everything was set and on the stove by 5pm, which was later than I would have liked, but c’est la vie.

This morning, I packed up my cooler tote (great investment) with four quarts of chili, and some other food and snack items, to be kept in the office for the week.  On Friday, the empty containers go back in the tote to be refilled on Sunday.  Routines are great.